The Clyde Brothers Talk About IF I COULD TELL YOU

The Clyde Brothers Talk About IF I COULD TELL YOU

Their award-winning film that delves into the world of black market fertility. 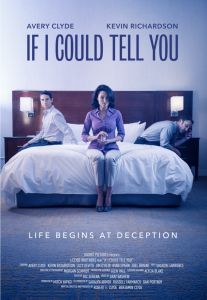 There are few decisions bigger than the one to become a parent for the first time, but one choice that is often overlooked is “how” to become a parent. For many, the desire to conceive and raise a child transcends a mere choice and exists as a calling. Yet the struggles of infertility are a widespread reality forcing many people to consider alternative options. The technological advances in IVF have given plenty of women the miracle of carrying their child, but are still ineffective for others who must then ask themselves, “now what?” This purgatory is explored in the new Clyde Brothers’ film, “If I Could Tell You,” which follows Abby into the underground world of black market conception.

Abby and her husband have been trying, unsuccessfully, to get pregnant for years, including IVF treatments that have left them broke. We meet the couple after they have “officially stopped trying”, but Abby is determined to become a mother, even by means unbeknownst to her husband. While on a trip to attend a self-help convention, she secretly meets with an anonymous sperm donor she discovered online. They arrange multiple meet ups over the 3 days Abby is ovulating in hopes she will become pregnant from one of his samples.

If I Could Tell You delves into the online, underworld of fertility treatments while showcasing an authentic portrayal of the struggle experienced by many women who deal with infertility.

The inspiration for the story comes from co-director/writer Rob Clyde’s own experiences with his wife Avery Clyde, who plays Abby in the film. Despite conceiving their first child without issue, while trying for a second they learned of a fertility problem and were told that pregnancy would be near impossible again. Their fertility journey included a myriad of possible solutions, doctor visits, and eventually Rob and Avery were able to foster a baby girl in hopes to adopt. After 3 months though, they had to return her to her birth mom when the state decided she was once again fit to parent her daughter. Heartbreaking as it was, the pain was soon turned to joy when Rob and Avery found out they had naturally conceived a second child amidst the distractions. 9 months later, their son Kieran was born.

After their experience, Rob was inspired to write a script exploring the challenges they met. “It’s such a personal battle that is hard to share with others because it’s so personal. We are just trying to say to viewers…this is happening all around you. Yes, underground non-doctor fertility, but in general, women and couples are going through extreme treatments, shooting themselves in the stomach with drugs, being told their bodies are too old or not working, sperm counts are low, whatever. It is just something that is primitive in all of us and when you find out you can’t do it, it becomes a mission.”

Kevin Richardson, who stars as the film’s anonymous sperm donor, was also going through similar fertility issues with his wife at the same time as the Clydes. “We were going through it with the Richardsons and looking for content to write a film. So we all said, why don’t we do a movie about this fertility thing? But we didn’t want to tell a sappy Lifetime movie either. We wanted it to be compelling, raw, and still entertaining.” It was after Richardson saw a 20/20 special about the black market for sperm that the angle of the film was decided upon.

The film is available on iTunes, Amazon Prime, Google Play, and more. Watch the trailer below, and visit www.IfICouldTellYouMovie.com

0 likes
No Comments
Prev Next

Why Your CEO Needs A Corporate Video Director
October 4, 2019
What the Heck is a Video Content Strategy?
September 4, 2019
How the Art of Watching Replaced the Art of Reading
August 4, 2019